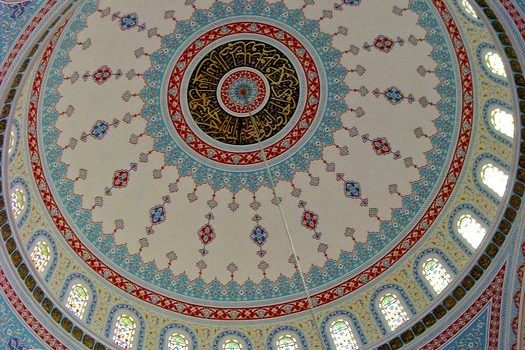 I recently came across Ms. A. Helwa’s book, “Secrets of Divine Love”. The beauty, holiness, and deep wisdom of the book touched me greatly. Her words, “Allah or God is love”  deeply resonated with me.  She uses the words God and Allah interchangeably, referring to the Divine Source. Ms. Helwa’s discussion of the universality of seeking the Divine as summarized by the sentence, “God is bigger than one religion”, and her respect for different spiritual paths opened my heart and mind to the book.

It was an honor to interview Ms. Helwa. She is very knowledgeable, patient, and brilliant in explaining complex ideas of Islam. I discovered a gentleness in her spirit, accompanied with a sharp intellect and passionate heart on a spiritual journey, as she discussed her views of Islam. This is a woman of  wisdom and compassion. My experiences of exposure to Islam have been mixed. Growing up in India, I was exposed to Sufi music, like the wonderful rhythmic devotional qawwali songs celebrating the deep unconditional love of God and the haunting ghazal songs about romantic love, loss and longing for the Divine.  I had the honor of visiting beautiful mosques in Istanbul, Alexandria and Cairo.  The golden silence in the mosques is peaceful to the heart.  However, my experiences of growing up in India, and living  in the US now, I also am continuously exposed to the televised images of violence associated with the Taliban or other terrorist groups. Ms. Helwa’s book and interview helped me understand the sacred teachings of love, compassion, mercy, and unconditional love of God (Allah)in Islam.

The interview is below. Ms. Helwa cautioned that her experiences is just one person’s views of Islam.

Anindita Ganguly (AG): Thank you for taking the time to talk with me today. I found your book deeply profound and beautifully written which taught me a lot regarding Islam. Please tell me about your background.

A. Helwa: I was born and raised as a Muslim in California and attended a Christian school. Growing up with my family, I practiced as a Muslim, but, I did not have a personal relationship with God. I took a sabbatical and stopped all religious practices. It took me ten years and a series of events to develop  a personal relationship with God.  I think experiences with God led to a personal relationship. I studied Islam and have a masters in  Divinity Studies focusing on Islamic Spirituality. Having attended a Christian school, I have developed a concept of universality and goodness of Divine Consciousness. My teacher, Sidi Muhammad Al-Jamal , is very well versed in universality of truth and different spiritual pathways to Divine Consciousness.

AG: What are core values of Islam?

A. Helwa: Everything that exists is because of Divine Will. Every moment is infused with Divine Love. There is a saying in Islam that “There is no God, but God”. Human Beings are innately good and are reflections of Divine Love.  Islam teaches that we need to remember that we come from the Divine. We are created to represent the loving qualities of the Divine. However, we are not God. We pray five times to worship God and remember who we are. Prayer is not driven by a compulsion. It is what we have the privilege to do in our relationship with God. All creation stems from Allah and thus, all beings are connected. The theme of interconnection in Islam is same as Buddhism. So as a Muslim, when I pray, I am praying with all of creation.

In Arabic, the term humanness refers to forgetting. Human beings are forgetful of their origin from God.   It is like human beings are often wandering through fog without knowing their true nature.  The spiritual journey includes the person unveiling the Divine reflection of Divine love and compassion in his/her  selfhood. The journey is more internal as opposed to seeking something outside of self. The spiritual journey in Islam includes surrender to Allah’s Will for us. When we block Allah’s Will in parts of our lives, we experience struggle. In Islam, Prophet Mohammad is the human manifestation of the Divine to teach us our true nature.

AG: That is beautiful.  Islam’s concept of innate goodness of people which people are on the journey to reawaken sounds very similar to the Hindu belief of self-realization and Buddhist belief of reawakening Buddha nature.

What are qualities of Allah in Islam?

A. Helwa: Allah is referred to as Al-Rahman which is described as (Most Merciful). The true meaning is not just that Allah is merciful, but that He holds creation and humanity in the Divine Womb with the compassion and deep love that a mother has for her child. It is said Allah loves His children more than a mother loves her children.

AG: When I think of the womb, the child in the womb is protected, safe and nourished.

A. Helwa: The child is safe and grows without knowing the mother. The child also does not know he/she is in the womb.

AG: Yes, very true. We, as children, are in the Divine Womb, but we do not know the Divine One completely. The incomprehensible nature of God is part of our relationship with God.

A. Helwa: Al-Rahim refers to Allah’s Grace, like a focused flashlight which is directed at us.  In Islam, there is a difference between trusting Allah versus trusting other human beings. So as human beings, we are like two boats leaning on each other in daylight. However,  we will drift in the ocean at night and we do not know our location in the morning. Anchoring our boat in Allah is fortifying because Allah is stable and firm ground because He does not change, as people do.

AG: I agree with you 100 percent. People can change but Allah does not. He is unwavering in His unconditional love. However, people’s love for us is subject to change.

A. Helwa: In Islam, we see God everywhere, whether you head to the east, west, south, and north. Since God created everyone with love, we cannot hurt others. You can hold the person’s behavior accountable but recognize the holy, sacred mystery of the person.

AG: What are your thoughts about Jihadist movements?

This bias against Islam is very similar to the race related bias against minority groups, such as African -Americans, in the US.

Fundamentalists or radicalization of a religion can happen in any religion. There is a rising Hindu nationalist movement in India also. I have also seen Islamophobia in India. Your book and interview are very informative because of my distorted skewed views and lack of knowledge about Islam.

A. Helwa: The rise of ISIS and Taliban occurred in a vacuum of society defined by poverty, and lack of social order after the negative impact of western colonization or interference. The ISIS and Taliban are unjust regimes who killed the most Muslims. These movements with radical beliefs date back 100 years ago. Islam does not promote violence or killing. People who call themselves as Muslims and engage in such horrific acts are not following Islam. Just as people, who call themselves as Christian or Buddhist and engage in violence, are not following true Christianity or Buddhism. People may call themselves as Muslims or Christians. However, their beliefs may not be compatible with what is articulated in the heart of the religion.

AG: How does Islam view women?

A. Helwa: In the spiritual context of Islam, women and men are seen as equal. It is not so much the gender but the work you do in life. The prophet Muhammad had a daughter and he cherished her. The Prophet would be what we call “girl-dad”. The Prophet advocated for the rights of women. When the Prophet was asked whether mother or father is important, he focused on the importance of mothers. However, sociopolitical structures in society may not reflect the views of Islam.

A. Helwa: There are similar beliefs about homosexuality in the Koran, as the Bible. However, I am a firm believer that we, as “reflections of Divine love and compassion”, need to demonstrate this love and compassion to everyone, even those we perceive as different from us.

A. Helwa: Sharia is a scholar’s interpretations of the Qur’an and words of the Prophet (peace and blessings be upon him). It’s important to point out that Sharia law is not agreed upon by everyone. The only agreed upon text by all Muslims is Qur’an in its original language. People often make the mistake to think that Sharia law is agreed upon by all and it’s not. Not to mention you can’t just read it blankly and make judgments. A scholar needs to interpret it AND people can’t take matters into their own hands… there is a judge and court. Also for example in terms of Jihad it’s original translation is to strive for and you cannot declare it as a person militarily. It’s something that a government employs under very specific laws and only in defense. The notion of suicide bomb etc is completely new cultural politic act attributed to Islam with no roots in it.

AG: Very true. Any other points that you want to share about Islam that I did not ask about?

A. Helwa: My prayer is that anyone who comes across this post knows that they matter regardless of what valley they are in. God’s heart sees all, even the seeds in a desert. Everyone matters because they are here because God has willed for them to be here for a holy sacred purpose. People need to find their purpose.

AG: Thank you so much for the interview. I loved listening to you.

A. Helwa: Thank you for the interview.

Readers interested in learning more about Ms. Helwa and “Secrets of Divine Love” (a book I highly recommend), please check out these websites:

Interview with A. Helwa: Islamic Spirituality of Divine Love
Tagged on: Psychology    Spirituality and religion